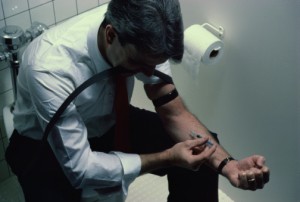 Workplace drug testing is a fairly recent and controversial trend in North America. It began in the United States in 1970 as a means of bringing the drug era generation under control in the workplace. Drug testing is often part of determining a potential employee's eligibility for hire, or it may occur at any point after hire to check up on the employee. The process involves the employee submitting to either a urine test or a cheek swab test. Some employers are adamant about drug screens while others have no use for it. Whether or not an employer will implement drug testing depends heavily on the CEO's stance on drugs.

Drug testing was developed in the United States. During the Nixon era, the administration was cracking down heavily on recreational drug users. Drug testing became a component of the newly emerging war on drugs and spread throughout the nation, particularly into the blue collar work sector. Since this time, the opinions on drug testing across the nation have fluctuated with the administration holding office. Conservatives are largely in favor of drug testing remaining in place while liberals want to see it eradicated or at least reduced. Right now, company policies on drug testing in the United States are all over the map. Because the private sector is so individual, there are companies that enforce drug testing militantly and companies that refuse to incorporate drug testing policies.

In Canada, drug testing policies are less stringent. Canada took some policies from the United States' war on drugs, but it decidedly did not go as extremist with it. Canada has a long history of being more tolerant of recreational drugs than the United States, although that is changing with a number of states legalizing substances like recreational marijuana. However, Canada's drug testing policies are in flux and are making the news in places like the Athabasca oil sands. Oil companies in Fort McMurray, Alberta are fighting for harder drug testing policies because of the high rate of substance abuse problems in the area. The potential policy change created an outcry against the invasion of privacy that drug testing would inflict.